Fantastic Bornean Animals and Where To Find Them: The Best Wildlife Encounters in Borneo

Borneo is a mecca for wildlife encounters.

If you’re on the planning stages of your Borneo itinerary, chances are that you want to spend most of your days exploring Borneo’s jungles.

If you’re a wildlife junkie like me, then Malaysian Borneo needs to be on your radar. While the most iconic animal is undoubtedly the Orangutan, the island is home to many other incredible species that deserve just as much love. That being said, here are my top wildlife encounters in Borneo!

Proboscis monkeys are endemic to Borneo and they also happen to be one of the weirdest-looking animals in the world. They’re characterized by their long-noses and bulging pot bellies. Back during the colonization period, Indonesians used to call them “Dutchmen” because male Proboscis monkeys apparently resemble a grumpy Dutchman.

Where to find them: Bako National Park is one of the best places in Malaysian Borneo to see these rare primates in the wild. Another great spot is on the shores of the Kinabatangan River. You’re more likely to find them close to the water – be it rivers, swamps, and even the beaches – they are known for being avid swimmers and will really only go inland if food is scarce. 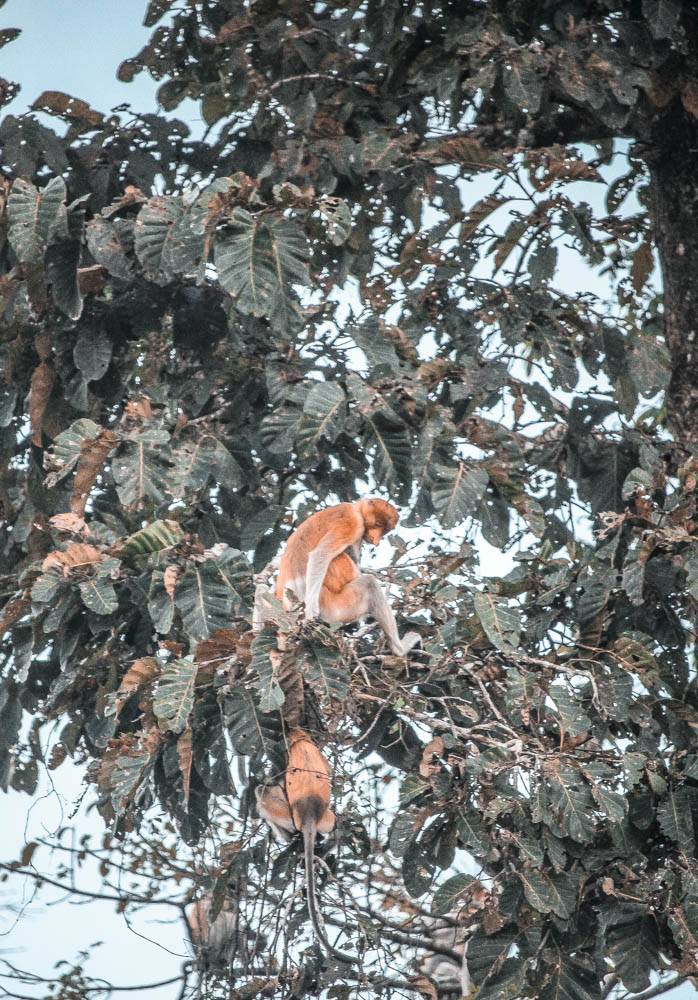 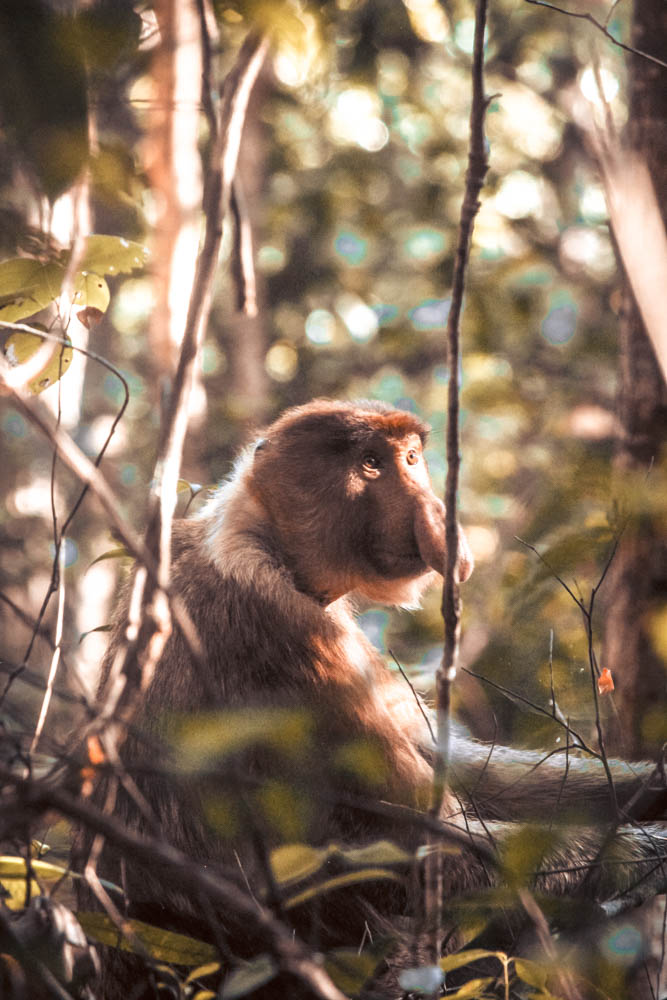 Your Borneo wildlife bucket list probably doesn’t include any insects in it, but this little guy will quickly change your mind.

I’m not a huge fan of insects, but when they look like this, I’ll be all over them! Despite their name, lanternflies don’t produce any light, but they’re incredibly colorful! Legend has it that if you get bit by a lanternfly, you’ll die unless you have sex in the next twenty-four hours. The funny thing about the myth, however, is that fireflies don’t even bite.

Where to find them: You’re most likely to find them in the forest at night all over the island. I found this one on a tree at Kinabatangan River. 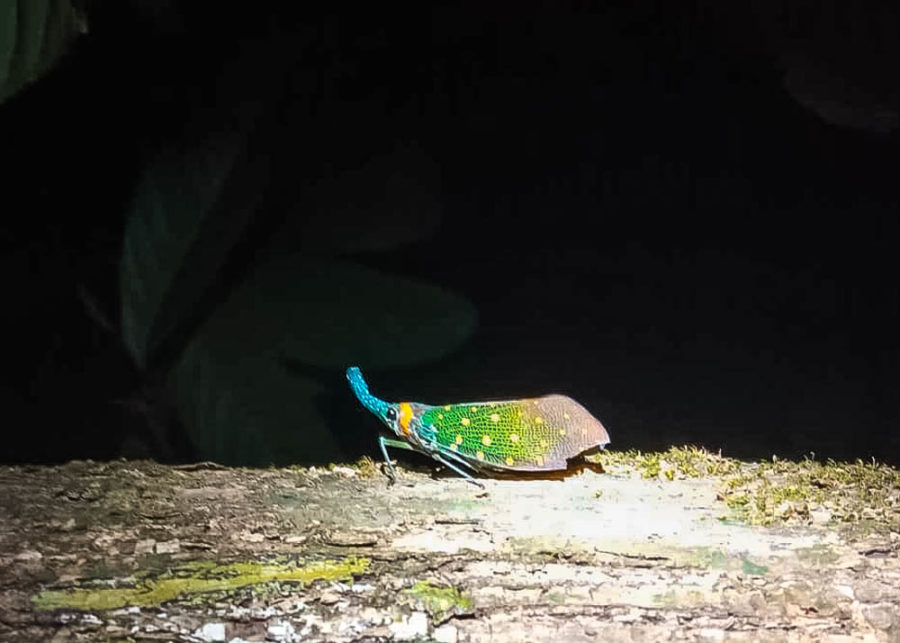 One of the top wildlife encounters in Borneo is seeing wild orangutans. They’re surely the island’s most iconic animals but sadly, also one of the most endangered. Habitat loss is the reason for their decline and a female orangutan only gives birth every 8-10 years.

Humans and orangutans share 97% of their DNA sequence and it’s incredible to see how human-like their behavior can be. In Malay, the word “orang” means human and “hutan” comes from the word forest. The word orangutan literally translates into “man of the forest.”

Where to find them: A boat ride through Kinabatangan River gives you some good chances to spot an Orang-utan, but you’ll need to get lucky. For the best chances of seeing them, head over to Sepilok Orangutan Center in Sabah or Semenggoh Wildlife Center in Sarawak.

–> Check out this post I wrote about visiting Sepilok Orangutan Center. 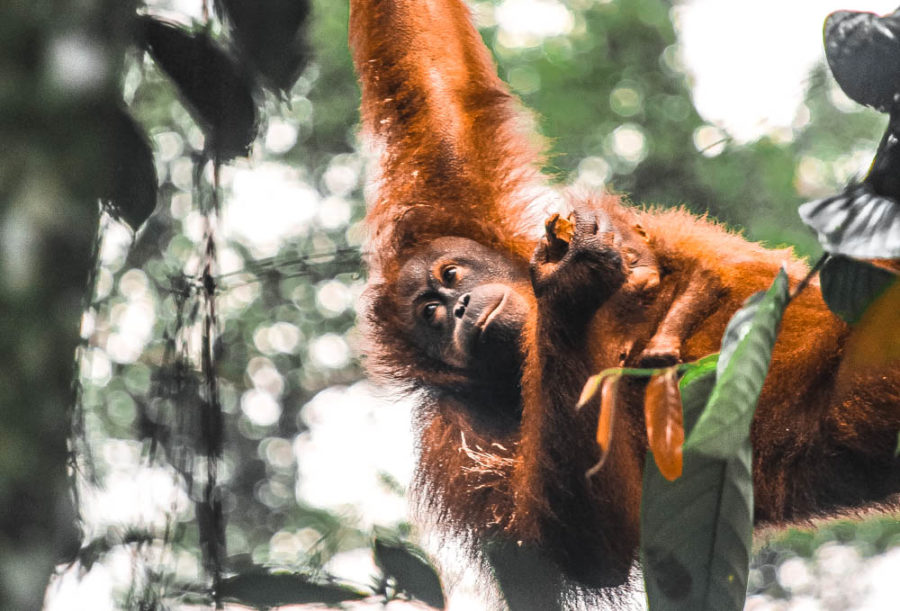 Sun Bears are a tiny, incredibly cute, and are commonly called honey bears due to their love for honey. They’re usually seen climbing trees in search for honeycombs!

Sadly, the Sun Bear popular has declined by more than thirty percent over the last three generations and the species is listed as Vulnerable under the IUCN Red List.

Where to find them: The easiest way to see them is at the Bornean Sun Bear Conservation Center in Sepilok. 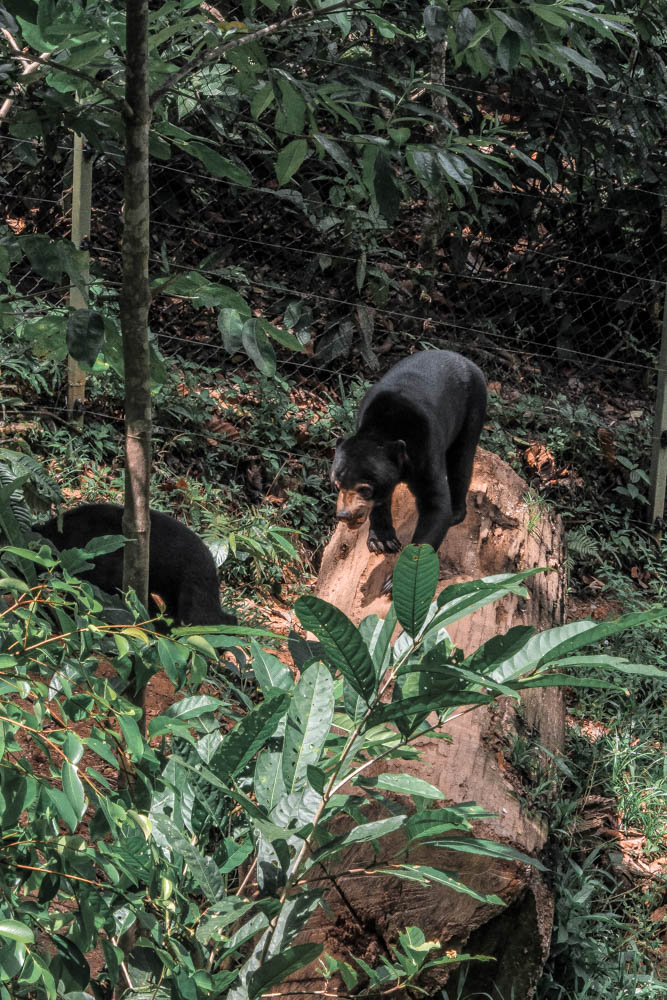 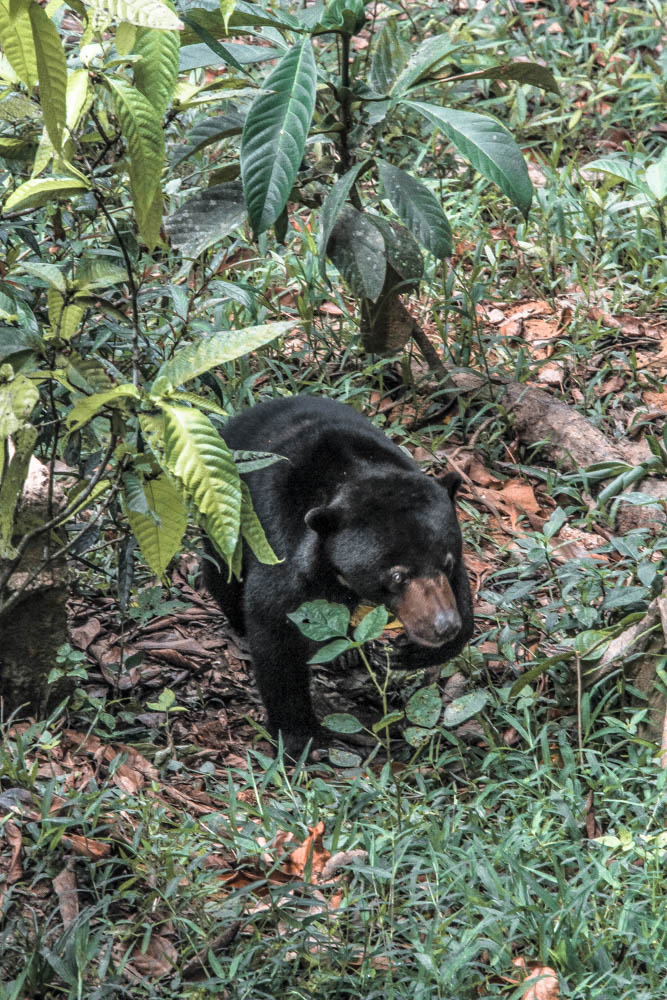 Borneo is a mecca for birdwatchers, but the biggest prize has got to be the Rhinoceros Hornbill.

They are one of the largest species of Hornbill and get this – theory has it that they are related to the Hadrosaurs. I mean, if you look closely, they do kinda look a bit like a dinosaur, don’t they? Hornbills are Malaysia’s national bird and can be easily identified by their impressive casques.

Where to find them: Kinabatangan River is a great place to spot these majestic birds. You also have a good chance of seeing one during an afternoon canopy walk at the Rainforest Discovery Center in Sepilok. 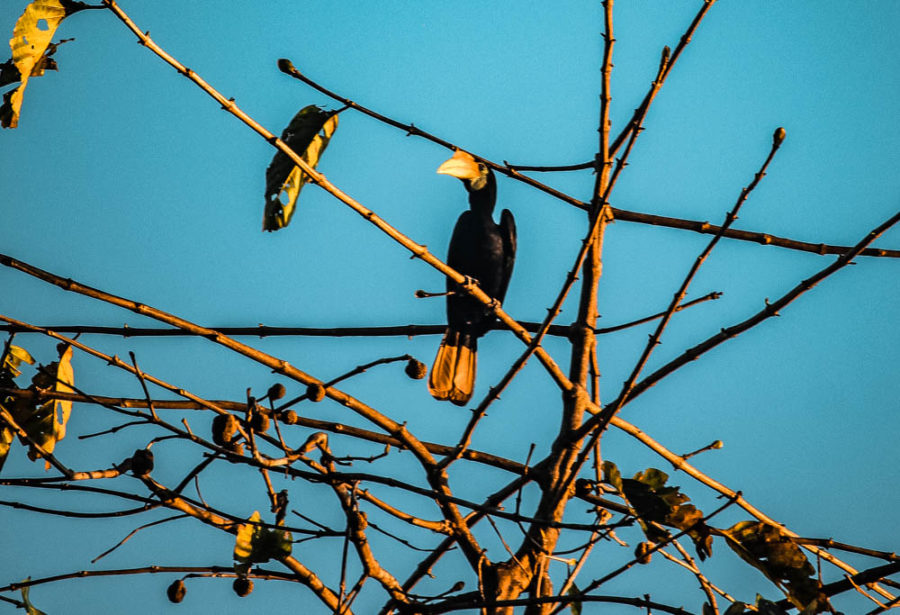 Silvery Lutungs are one of the easiest animals to spot in Borneo. They’re incredibly agile and seeing them jump from tree to tree is a real treat! Make it a mission to spot a baby, too – although adult ones are characterized by their silver color, baby Lutungs have orange fur!

Where to find them: They’re all over Borneo, but the easiest place to see them up-close it at Kinabatangan River and Danum Valley. 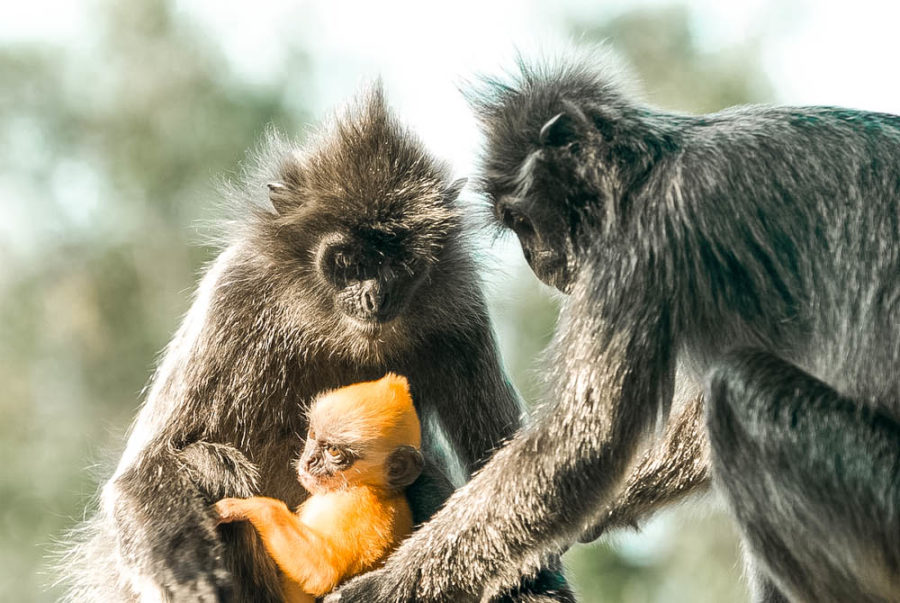 Photo by Peter Gronemann under a CC BY 2.0 license.

Pygmy elephants are the smallest sub-species of Asian elephants and are only found in northeastern Borneo. Due to habitat loss, less than 1,500 of these animals exist to date (seriously, what are we doing?!).

Bornean pygmy elephants have always been a bit of a mystery. It’s unclear exactly where they come from, but it was always believed that they were shipped from Sumatra during the elephant trade centuries ago. Their tame personalities are one of the reasons researches believe pygmy elephants came from a domesticated collection according to this study.

Where to find them: As far as wildlife encounters in Borneo go, pygmy elephants are a rare sight. If you’re feeling lucky, the best places to look for them are at Kinabatangan River, Deramakot Forest, and the Danum Valley. 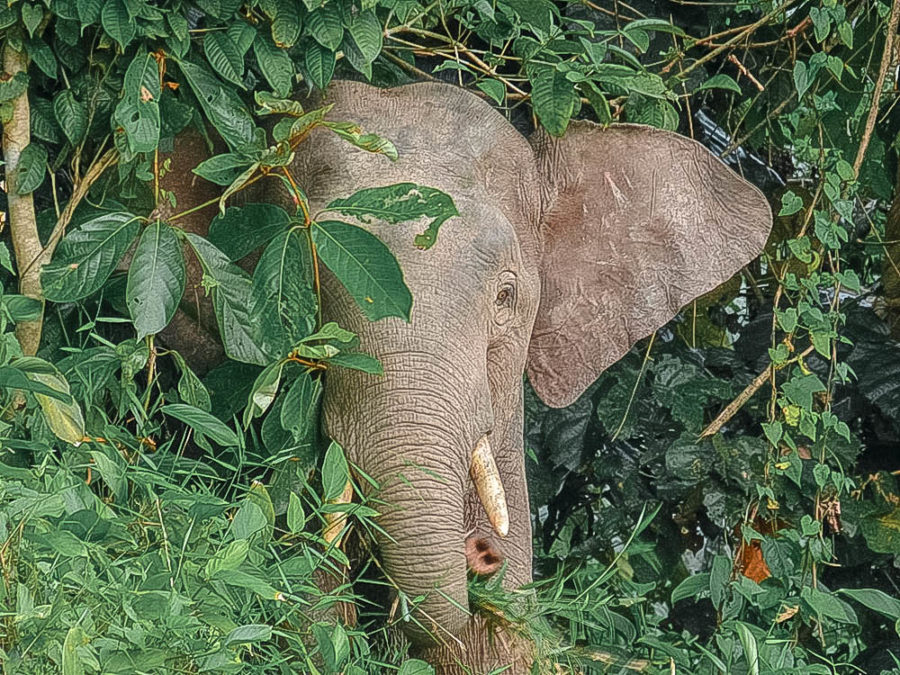 I know this post is all about wildlife encounters in Borneo, but honestly? I feel like we don’t give plants enough credit. These little guys are incredibly fascinating.

Pitcher plants are found all over Borneo’s forests and most of them are carnivorous. They are incredibly important to the survival of many animals in Borneo. For instance, the Nepenthes tentaculata pools water and provides a safe place for frogs to lay their eggs. Another recently discovered species are used by bats as a place to sleep and in turn, the plant used the bat’s feces as nutrients.

It’s all just too interesting and shows how nature is connected in so many ways.

Where to find them: You’ll find them all over the forest, but one of the best places to see many of them is in Kinabalu National Park.

And that’s the list! There are so many other creatures animals that call Borneo their home, but these are the easiest to find!

What are other incredible wildlife encounters in Borneo?

8 Beautiful Things To Do in Corfu

What To Pack For Curaçao? The Ultimate Packing Guide To Paradise

How To Do Laundry While Traveling 101